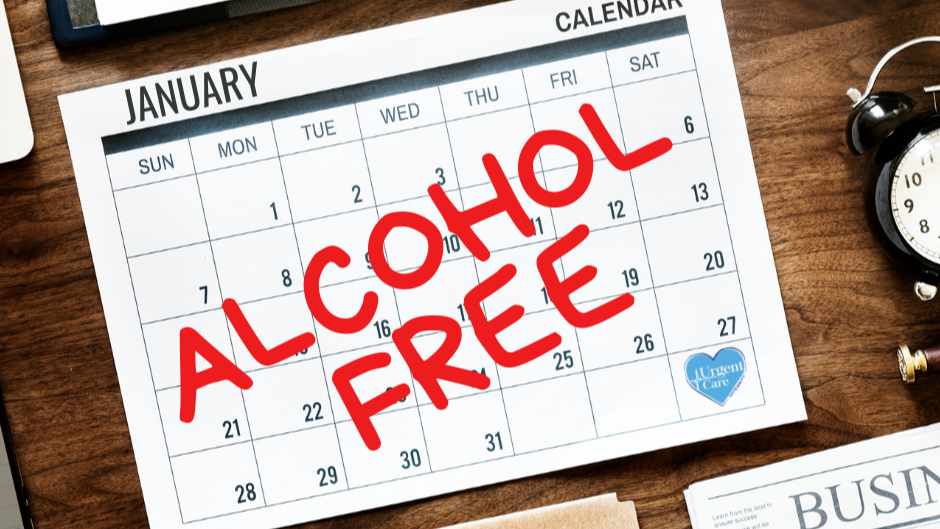 Something Amazing for Your Health, If Done the Right Way

For those of us who have made “resolutions”, a great one to consider is Dry January – and yep, it’s just what you would think it means - completely ditching alcohol in the first month of the new year. For some, it’s part of a New Year’s resolution to drink less, while others claim it’s a way to "detox" from excessive drinking over the holidays.  And for others, it’s often the first step to a lifestyle of full sobriety.

Over this past holiday period, many people report drinking more than usual, as evidence suggests people are using alcohol to better cope with stress caused by the pandemic. Perhaps you’re one of them and would like to kick off 2022 by intentionally not using alcohol as a coping mechanism for a specific period of time.  Sort of a “time out.”

To get the most out of a Dry January, use the month as a chance to reassess (and clearly adjust) your drinking habits and relationship with alcohol after the month is up—as opposed to a license to drink as much as you want the rest of the year. Here are some great tips and insights on Dry January from Korin Miller, a health writer for SELF publications.

A good thing to assess is your intake - No Drinking vs Moderate Drinking vs Heavy Drinking.  The NIAAA uses the USDA Dietary Guidelines to define moderate drinking as up to one drink per day for women and two drinks per day for men. Heavy drinking, according to the NIAAA, means consuming more than three drinks in a day for women or more than four drinks for men. The Substance Abuse and Mental Health Services Administration (SAMHSA) has a slightly different definition, describing heavy alcohol use as binge drinking (four or more drinks for women and five or more drinks for men on the same occasion) on at least five days in the past month, the NIAAA explains. So, if your drinking habits are closer to “heavy” than “moderate,” per these guidelines, keep in mind that a transition to "dry" may be a bit harder for you than someone else.

You should also be careful—and possibly give your doctor a heads up—before abruptly stopping drinking if you've been drinking heavily. Whenever you go cold turkey after heavily drinking regularly, it’s possible to experience mild-to-moderate symptoms of alcohol withdrawal that feel like a nasty extended hangover, such as anxiety, irritability, nausea, fatigue, headache, and shakiness, according to the U.S. National Library of Medicine. (People with a history of heavy drinking may be at risk of a severe form of alcohol withdrawal, the U.S. National Library of Medicine explains, which is why alcohol-dependent individuals often need medical support to stop drinking.) And if you’re someone with a higher risk of seizures, you need to touch base with your doctor and be especially cautious.

Great reasons to consider a Dry January, and the health benefits you can reasonably expect:

1. Your general health may improve.
It’s not news to anyone that excessive drinking and binge drinking can lead to several negative health effects, including high blood pressure and high cholesterol.  According to doctors, excessive drinking impairs your sleeping patterns and increases the risk for certain diseases, including breast cancer, heart disease, stroke, and liver problems.

Even though abstaining for one month won’t treat or prevent long-term health issues, it likely couldn’t hurt as far as your health is concerned. While we don't know exactly what lasting effect (if any) Dry January will have on your health, it's reasonable to assume that abstaining from drinking is generally good for your overall health—as long as you don't use this hiatus as an excuse to drink heavily during the other 11 months of the year. When it comes to your liver, for instance, experts know that alcohol puts metabolic stress on the liver and that about half of all liver disease deaths are from alcoholic liver disease.  Given the increasing incidence of millennials dying from alcohol-related liver diseases, taking a load off this vital organ certainly isn't the worst idea.

And while there aren’t many large, rigorous studies on the health effects of short-term abstinence, there is some evidence that one month off drinking can lead to health benefits, at least temporarily and in the near-term. In one observational study, published in the British Medical Journal in 2018, researchers tracked 94 healthy moderate-to-heavy drinkers who abstained from alcohol for one month and found improvements in various health markers like blood pressure, liver function tests, insulin resistance, and molecules that play a role in cancer growth.

2. You’ll see how your body feels without alcohol.
The biggest benefit is learning where your body is in relation to alcohol and what you want your relationship with it to be. If, for instance, you've been feeling not your best lately and you suspect that your regular (or excessive) drinking habits might be contributing to that, it could be helpful to see how you're feeling (mentally, physically, socially, etc.) when you don't have booze for a month.

3. You might sleep better and feel more energized.
Dry January may also be good for your sleep and energy levels, which in turn have their own positive effects. Abstinence can help you feel more clear-headed and experience better sleep along with regular digestion. The sheer fact that you're not staying up late drinking most nights can lead to sleeping more and skipping workouts less. All of that can impact how productive you are, how focused you are at work, and how you feel overall, says Koob—a kind of snowball effect.

4. Your immune system may be in better shape.
Drinking too much can weaken your immune system, according to the NIAAA. Being intoxicated can acutely suppress immune function, making you more vulnerable to pathogens, while chronic drinking can lead to inflammatory reactions throughout the body. Even one night of heavy drinking can impede your ability to fight off infections up to 24 hours later.  This is especially important during the spread of COVID and variants.

5. If weight loss is a goal of yours, cutting back on drinking may help.
It's important to note that cutting calories with weight loss as a goal isn't necessarily the right choice for everyone, because the relationship between weight and health is more complicated than that (and weight-loss diets generally don’t work in the long term).  If you're having several drinks a week, one result of Dry January could be a decrease in your overall caloric intake.  Unlike, say, cutting out a certain food group or restricting caloric intake from food, cutting alcohol is not going to compromise on any of the fuel and nutrients your body needs to feel satiated and nourished.

6. You might reevaluate your relationship with alcohol.
Once Dry January is over, check in with yourself to see how the experiment went and what that might mean for your drinking habits going forward. Here are the kinds of questions you might pose to yourself: Do you feel better? Healthier? More productive? Not as different as you thought you might? Have your sleep, mood, or exercise patterns changed? Have you saved money? Do you have a newfound appreciation for the ritual of having a glass of red with dinner? Maybe you've found that you're more energized without all those hangovers, or you're less anxious after a night of drinking. Or, hey—maybe you've found that you basically feel the same and just miss the social aspects of drinking with friends over a Zoom happy hour. All of these are helpful takeaways to consider.  After Dry January is over, use what you’ve learned about your relationship to drinking to inform how you approach things moving forward.

Serving the Community Since 1981